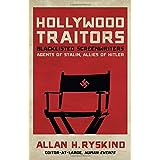 Allan Ryskind, who was raised in Southern California, confronted an enormous challenge when he decided to publish Hollywood Traitors — Blacklisted Screenwriters: Agents of Stalin, Allies of Hitler. He added to his difficulties by identifying himself as editor-at-large for the conservative magazine Human Events. He had to be impartial and above reproach to succeed in his project. With these hurdles confronting him, he had to establish beyond any doubt that the “Hollywood Ten” who testified before the House Un-American Activities Committee (HUAC) in 1947 were not liberal heroes defending their right of free speech, but were Soviet agents, and the congressman who questioned them had not persecuted innocent screenwriters.

If this was not enough of a high hurdle, Ryskind also needed to prove that these individuals were members of the Communist Party of the United States of America (CPUSA) who advanced the cause of the Soviet government ruled by Joseph Stalin’s totalitarian regime.  If the United States only embraced communism, these screenwriters argued, Americans would live in utopia.  In addition, these screenwriters defended the nonaggression pact between the Soviet Union and Germany. After the outbreak of World War II, they remained staunchly committed to it until Adolf Hitler invaded the Soviet Union in 1941.  Then, they abruptly reversed their opposition to the British and French, and joined the chorus for an Allied victory.

Those liberals and ultra-leftists who defended the Hollywood Ten in 1947 today dismiss the overwhelming evidence that these individuals were communists who attempted to take control of the Hollywood trade unions. These writers also purposely developed scripts to idealize the communist system and to denigrate American democracy.  Current well-known actors like Richard Dreyfuss and Sean Penn ignore the facts and continue to portray these screenwriters as patriots who defended their right of free speech.  When they went to prison for contempt of Congress, that was their price for standing up for freedom.

The Hollywood Ten, in fact, were prepared to replace democracy in the United States with the brutality of Stalin, by violent revolution, if necessary.  The ten principal characters are worth identifying: Alvah Bessie, Lester Cole, Edward Dmytryk (the only one who renounced his Communist Party connection), Ring Lardner Jr., John Howard Lawson, Albert Maltz, Samuel Ornitz, Adrian Scott and Dalton Trumbo. Rather than being applauded for their virtue, they should be recognized as traitors, individuals who betrayed their nation.

Ryskind proves his case with a mountain of documentary evidence.  The book’s shortcomings cannot change that conclusion.  However, if this volume had received a careful proof reading and fact checking, this would have been a major contribution to the subject.

The author, for example, correctly points out on several occasions that many HUAC critics make Senator Joseph McCarthy a committee member.  He, in reality, never served in the House of Representatives, and thus could not have been a member of any House committee.  Since Ryskind condemns others for such obvious mistakes, he must maintain the highest standards and be certain that his facts are accurate.  Some are not.

Cordell Hull, for example, is identified as Under Secretary of State. President Franklin Roosevelt appointed him secretary of state, and Hull became the longest-serving individual in that office. He never was an undersecretary.

More troubling is the fact that Ryskind claimed that Richard Nixon’s role in the October 1947 Hollywood Ten hearings “was somewhat muted.” Nixon did not participate in those hearings because he was in Europe on the Herter mission.  The author later claimed that on the morning of January 14, 1952, Congressman Nixon was Elia Kazan’s “chief questioner” at another HUAC hearing.  That, too, is inaccurate. Nixon became a United States senator in December 1950, and therefore, he could not have been a member of any House committee.  If Ryskind had read my book The Contender (1999), he would not have made those errors.

While these mistakes should have been caught and corrected, Ryskind also should have relied on various scholars to strengthen his arguments. Donald Critchlow’s documentation in When Hollywood Was Right (2013) would have been supportive for the battle within the movie industry.  Allen Weinstein and Alexander Vassiliev, The Haunted Wood (2000), John Haynes and Harvey Klehr, Venona (1999), illustrated how active Soviet agents were during this period.  Finally, John Haynes, Harvey Klehr and Alexander Vassiliev published Spies (2009) that conclusively demonstrated how widespread Soviet espionage penetrated America.

With greater attention to the frightening possibilities of nuclear warfare that the Hollywood Ten and their followers fomented and corrections of unnecessary mistakes, this volume would be an even greater asset to counter the mass of erroneous information over the Hollywood Ten.  Even with its weaknesses, Ryskind has given us an irrefutable account.  The Hollywood Ten and their allies served a foreign power with the intent to replace the United States government with Stalinism.  How any American movie star or any citizen can continue to defend these traitors is a mystery.

Irwin F. Gellman is the author of The President and the Apprentice: Eisenhower and Nixon, 1952-1961and four other books on American presidents. His next book, which he is currently working on, is a volume on Nixon and Kennedy.