Obama’s Nuclear “Deal” with Iran: A Historic Agreement, or an Epic Failure?

On July 14, the “P5 + 1” powers (the U.S., U.K., France, Russia, China, and Germany) and the EU signed the Joint Comprehensive Plan of Action – also known as the Vienna Agreement, or simply the “Iran deal” – with the Islamic Republic of Iran (IRI).  The terms of this nuclear deal with Tehran seemed so unfavorable to Washington and its allies (especially Israel) as to prompt both amazement and ridicule. The Jewish comedian, Jackie Mason, mocked the unbelievably lax and naïve inspection regime stipulated by the agreement, which would allow Tehran to delay inspection of its nuclear sites for up to 24 days, by stating that even New York City has tougher food inspection rules than the agreement negotiated by Kerry: “We’re not protected from a [nuclear] bomb but we’re protected from a bad quality of a tuna fish.” Current GOP presidential candidate, and former Arkansas governor, Mike Huckabee, asserted bluntly that the agreement “will take the Israelis and march them to the door of the oven.” President Obama’s “historic deal” with the Islamist regime occupying Iran is summed up well by the Heritage Foundation:

The Vienna Agreement represents a Faustian bargain in which the Obama Administration agreed to dismantle sanctions and legitimize Iran’s nuclear program in exchange for temporary restrictions on uranium enrichment, greater (but still limited) access for U.N. inspectors and promises to comply with the Nuclear Non-Proliferation Treaty (NPT) —promises that Tehran has repeatedly broken in the past. If Iran reneges on the agreement, as it could easily do since most of its concessions are quickly reversible, the international sanctions regime will be almost impossible to put back in place.

After 15 years, limitations on Iran’s stockpile of enriched uranium are ended, and enrichment activities can be moved outside the Natanz facility and scaled up massively, making it easier and faster to stage a nuclear breakout. If Tehran bides its time it will be in a much better position to make a final sprint to a nuclear arsenal.

Iran’s nuclear expansion will be paid for with the huge financial windfall, estimated at up to $150 billion, which the regime will pocket in sanctions relief when its frozen assets are released, with tens of billions more dollars coming from expanded oil revenues after sanctions are ended. This enormous signing bonus also will be used to strengthen the ayatollahs’ brutal police state, build up its conventional military and ballistic missile forces, and escalate its export of terrorism and subversion.

The administration’s negotiators did not even bother to request the release of four Americans still imprisoned in the Islamic Republic. In fact, Obama’s angry reaction to a reporter who dared to press him on this matter is both telling and disturbing.

Why would Team Obama agree to such an unfavorable “deal”? As Israeli prime minister, Benjamin Netanyahu Tweeted: “When willing to make a deal at any cost, this is the result.” Indeed, a “deal” whose balance benefits the Islamist occupation regime in Iran is the inevitable outcome of negotiating from a position of weakness. The ayatollahs and their henchmen realize that the U.S. faces multiple threats and crises throughout the world, including the Russian invasion of Ukraine, Chinese bullying in East Asia, and the ISIS Caliphate in Iraq and Syria. They also know well that Obama is desperate to obtain a “deal” for reasons of his “historic legacy,” with little concern for the future (Apres nous, la deluge!). Thus, Obama’s negotiators were easily outmaneuvered by Rohani’s foreign minister, Mohammad Javad Zarif, who – as the scion of a Tehran merchant family – surely knows how to drive a hard bargain and to deceive the naïve “infidels” (remember: deception is the key to politics and warfare from Russia through China to the Middle East!).

All of this is compounded by the fatalistic notion that there is no alternative to the “deal” and the fear of losing Ayatollah Khamenei’s “trust” – in the event that Congress blocks the agreement – in spite of President Obama’s assurances that the deal is “not based on trust, but verification.”  Republican presidential candidate Donald Trump even speculated that “maybe they’re [Obama and Kerry] not bright. There is something wrong with them.”

But perhaps there is an even more sinister explanation? 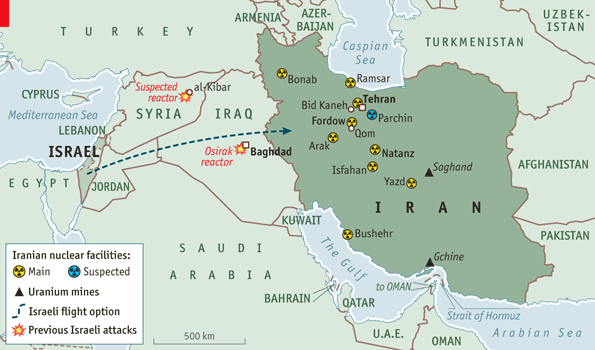 Nuclear geopolitics in the Middle East (Source: The Economist)

It is certainly no secret that Obama and his inner circle hail from the radical left milieu which, in turn, believes that America, the West, and its allies (including Israel) were and continue to be racist, imperialist, and (post)colonialist oppressors of the mostly colored Third World “Other.”

Western radical leftists of various stripes agree with the likes of Ali Khamenei and Vladimir Putin that the U.S. – as the leader of the Western world and the world’s greatest superpower – is a problem and a nefarious actor responsible for great evil in the world and must, therefore, be contained – for its own good and that of the rest of the world. One leftist professor from Rutgers recently gave vent to this mentality by asserting that “America is more brutal than ISIS.” According to this worldview, Islamists and communists are revolutionary “social movements” essentially reacting to and attempting to right the wrongs of Western colonialism (e.g. the Sykes-Picot agreement) and American imperialism (e.g. Operation “Ajax” ousting Iran’s prime minister Mossadegh in 1953). Hence Obama’s soft-pedaling of Islamist barbarism and his refusal to link ISIS to Islam, lest we perfidious white Westerners – who should feel guilty and ashamed of our past and our ancestors’ (real or alleged) crimes against Muslims and other people of color – climb on top of our “high horse.” Can we realistically expect politicians blinded by such a perverse ideology of self-loathing to negotiate in our best interest?

Yet, another factor that inevitably results in flawed and counter-productive Iran policy is confusion about the country’s politics, history, and culture. This affliction plagues both the left and the right (including both the “neocons/hawks” and the paleoconservatives and libertarians), which has bred a narrow focus on two proposed policy options at extreme ends of the spectrum: either naïve “engagement” or a military solution. However, there are a few things we should remember:

The Islamist regime does not represent the nation of Iran. In fact, the Shia theocracy seems to be widely reviled among a population that is increasingly secularist and nationalist. Persians have a very long historic memory and many Iranians view the Arab invasion of Persia in the seventh century, and the subsequent Islamization, as a historic national tragedy on par with the destructive Mongol conquest in the thirteenth century. As a result, the current regime – with its emphasis on the Islamic and its cold shoulder toward (or even fear of) the pre-Islamic – is sometimes referred to as the “third Arab invasion” or as “Arab-worshipers” (Arabparastan). The renewed interest in Zoroastrianism (the pre-Islamic religion of Greater Iran) exhibited by quite a few Iranians – as well as Kurds – is at least in part a reaction to Islamism.

IRI is not a “rational actor” simply pursuing the “national interest.” Islamism – particularly outside of the Arab world – is a universalistic religious ideology hostile towards nationalism, which is viewed as “idolatrous” and harmful to Islamic unity. The regime established by Khomeini is oriented primarily toward pan-Islamic objectives, not nation-centric ones. As in the Soviet Union and other communist states, the “national interest” is at best a junior partner or cover for ideological goals, such as exporting the Shia version of Islamic revolution or funneling money and resources to Hamas, Hezbollah, or the Yemeni Houthis. Many Iranians resent sending money to “Arabs” while the economic situation in IRI deteriorates.

The bomb is not only aimed at Israel. The Jewish state and Iran’s neighbors have very good reasons to fear an IRI nuclear arsenal. The possibility that the Islamist leadership in Tehran might fulfill its many promises to “wipe the Zionist entity off the map,” or even donate a nuclear device to Hezbollah or Hamas, cannot be casually dismissed. Nevertheless, we should not forget that the regime seeks nuclear bombs to also boost its own power, leverage, and survivability. Following the example of communist North Korea – which violated a nuclear “deal” it initially concluded with the Clinton administration – the IRI leadership concluded that nuclear weapons would render the country immune to foreign military intervention. That, in turn, would entrench the regime’s power domestically and, possibly, also boost its nationalist credentials (many anti-regime Iranians believe that their nation should have the right to nuclear capability if it so wishes). Furthermore, Tehran no doubt hopes that the windfall IRI is expected to reap from the nuclear “deal” might defuse social discontent by, at least temporarily, rescuing Iran’s economy from the ditch into which the regime has driven it.

Don’t forget Moscow and Beijing! A key reason explaining Tehran’s brazenness is that the ayatollahs know that they – like the neo-Stalinist tyrants in Pyongyang – have the backing of Russia and China, which are both nuclear powers. The post-Soviets built Iran’s Bushehr reactor and plan to build a second one at that location, while the post-Maoists intend to build two additional reactors. Since the “deal” includes the lifting of the arms embargo aimed at Iran, the Kremlin announced its decision to deliver a modernized version of the Russian S-300 air defense system to further bolster the Islamic Republic. For both Moscow and Beijing, Tehran’s anti-American troublemaking is a welcome diversion distracting Washington’s attention from Ukraine or the South China Sea.

The main problem with the Iran “deal,” however, is its counter-productive nature. Quite simply, the “deal” is likely to accomplish the very opposite of its stated goals – the relaxing of tensions and the defusing of conflict. After all, the “deal” sends the wrong message to anti-American rogue regimes throughout the world: cause trouble and threaten to obtain nuclear weapons, and America and the West will bribe you and, therefore, reward your bad behavior. Hence, Obama’s “historic deal” is a classic case of perverse incentives.

Paweł Styrna has an MA in modern European history from the University of Illinois, and is currently working on an MA in international affairs at the Institute of World Politics in Washington, DC, where he is a research assistant to the Kościuszko Chair of Polish Studies. Mr. Styrna is also a Eurasia analyst for the Selous Foundation for Public Policy Research and a contributor to SFPPR News & Analysis.